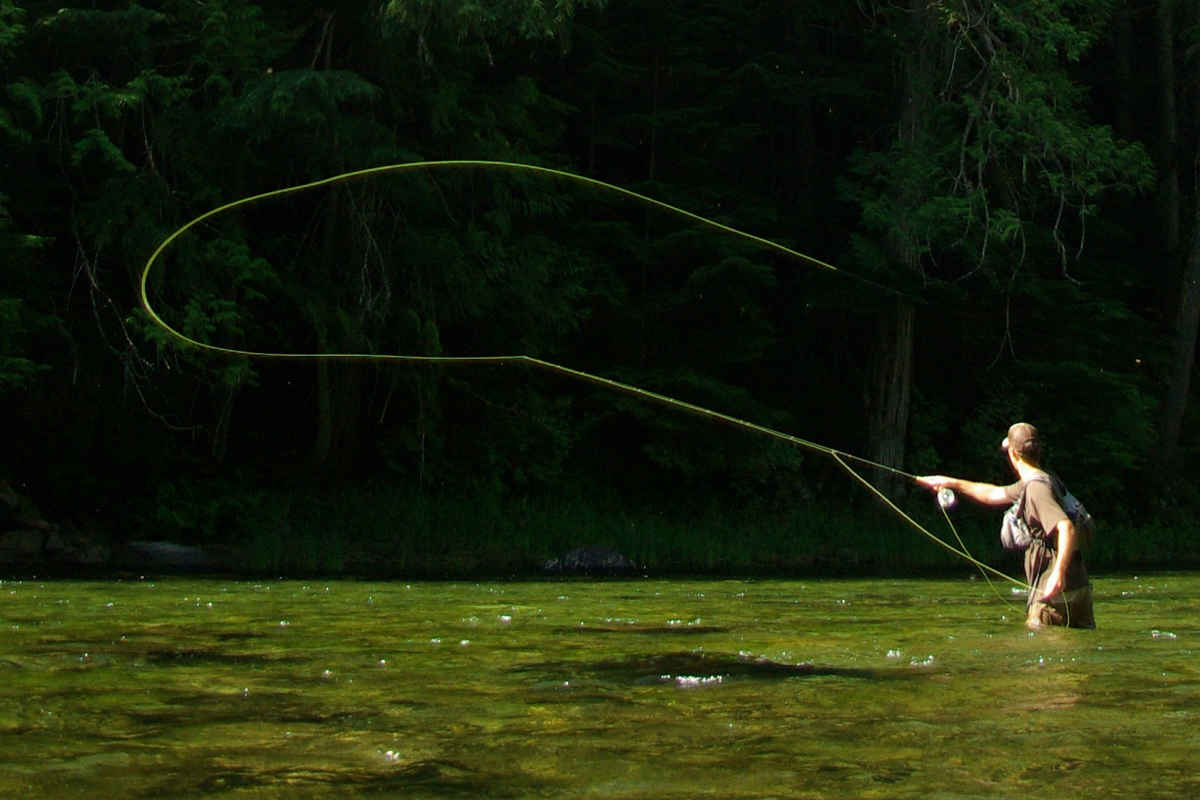 An interview with Don Freschi, Dwayne D’Andrea and Rod Zavaduk

Getting started in fly fishing can be intimidating, but the potential rewards make it all worthwhile. Fundamentally, all one really needs is a rod, a reel, line, and fly, but before you put these together and attempt to cast a weightless fly made of hook, fur, and feather into the ether, you must be prepared for what is to follow, for the pool is fathomless.

“It’s as deep as you want it to be,” says ‘Sport Fishing on the Fly’ host and Trail native Don Freschi. “I mean there are single-hand rods, and double-hand rods, and fly-tying and all the different components. You can spend a lifetime trying to figure it out, it’s such a cool sport. I’m 30-plus years into fly fishing and I’m only half way there, I have another 30 years to learn.”

To enter the variable world of fly fishing, long-time fly angler and owner of the Castlegar Sports Centre and Fly Fish Shop, Rod Zavaduk, recommends initiates start out with the basics. Rods are measured by weight and length from delicate two-weight, six-foot rods for small creeks or ponds rife with eight-inch trout, to 12-weight, 15-footers specially designed for larger prey like salmon, shark, or tarpon.

On Kootenay waters Zavaduk recommends four-and five weight rods with matching line for smaller rivers and lakes, and up to eight-weight, nine-foot rods for larger rivers like the Columbia, but for an all-purpose outfit and good starter-rod suitable for most types of water, he suggests a nine-foot, five-or-six-weight rod.

Rod-reel-and-line packages can be picked up at Castlegar Sports and Fly Shop, starting at about $150 and Zavaduk highly recommends a fly-casting course to go along with it. “If they want to be serious and learn how to cast that is about as inexpensive as you want to go,” he said. “Anybody who gets started should get at least one casting lesson under their belt before trying it out. It is so important . . . presenting the fly is number one. If you can’t cast, you can’t present, and you can’t catch a fish.”
And, let’s face it, catching fish is an important element to fly fishing.

Fortunately, the West Kootenay and Boundary has some of the best water around for stream or lake fly fishing. Popular spots include the Kettle River, and Jewel, Willgress, and Christina Lakes in the Boundary, to the Columbia, Kootenay, Pend d’Oreille, and Salmo Rivers, and Nancy Greene, Champion, Erie, Rosebud, and Kootenay Lakes in the West Kootenay, not to mention the countless small mountain lakes that are always productive in summer.

Like Zavaduk, Trail native Freschi started fly fishing in the Kootenays as a young man, and the countless hours throwing string on the Columbia River with his brother Dale only fueled his passion. It led him deeper into the world of fly fishing, fly-tying, entomology, and videography that he and friend Grant Fines launched a local T.V. show in 1995 called Sport Fishing on the Fly (SFOTF) on CHECK TV and the World Fishing Network (WFN).

The Trail native travels across Canada and the U.S. fly fishing for a variety of species of fish from steelhead on the Cowichan River to prospecting for Atlantic Salmon on the Miramichi in New Brunswick, but his favourite stretch of water still flows through his backyard and is featured prominently on his show and website.

“People don’t realize how good it is here,” said Freschi. “I mean I’ll be in the Columbia River by myself and having 40-50 fish nights. But it’s a tough river, you have to know how to fish it, and spending my whole life here, it’s pretty awesome.” While Freschi has the advantage of years of experience, he says that a few simple initial steps will get the novice up and casting and catching fish in no time.

“Fly fishing is for everybody,” says Freschi. “I’ve had kids, women, men everybody come over here and catch fish. It takes time, but you know what? You can catch fish right away, you just have to get out on the water and get use to it.”

Dwayne D’Andrea agrees. The owner of Mount Valley Sports Fishing and Tours has been guiding the Columbia and other Kootenay waters for 30 years and often takes beginner fly fishers out on big water like the Columbia River with good success.

“What you really you want to do is find some slack water but work the seams, and start short, short casts,” says D’Andrea. “And that’s the advantage of having a drift boat, if they are not casting long you can work them in to it. So you are showing them casting, you show them the rising fish, and then you have a chance to hook them. It actually gives them the experience of what fly fishing is all about, because they can see the fish moving and they can read the currents. We try to teach the beginners all aspects – reading the water, the flies, and getting them on the water is the trick for that.”

D’Andrea’s expertise and intimate knowledge of local rivers and lakes is often the difference between an enjoyable and safe day on the water to one spoiled by frustration.

“Guides are important because they keep you safe; and for beginners, they are going to judge you on how you cast and take you to the appropriate spot on the river that is safe and productive.”
Deceiving a fish with a fly, especially one you’ve tied yourself is especially rewarding. But the real joy of fly fishing lies in those moments of awareness that only a connection to the natural world can bring – that connection to the Columbia River.

“It is a great sport,” confirms Freschi. “It adds years to your life.”