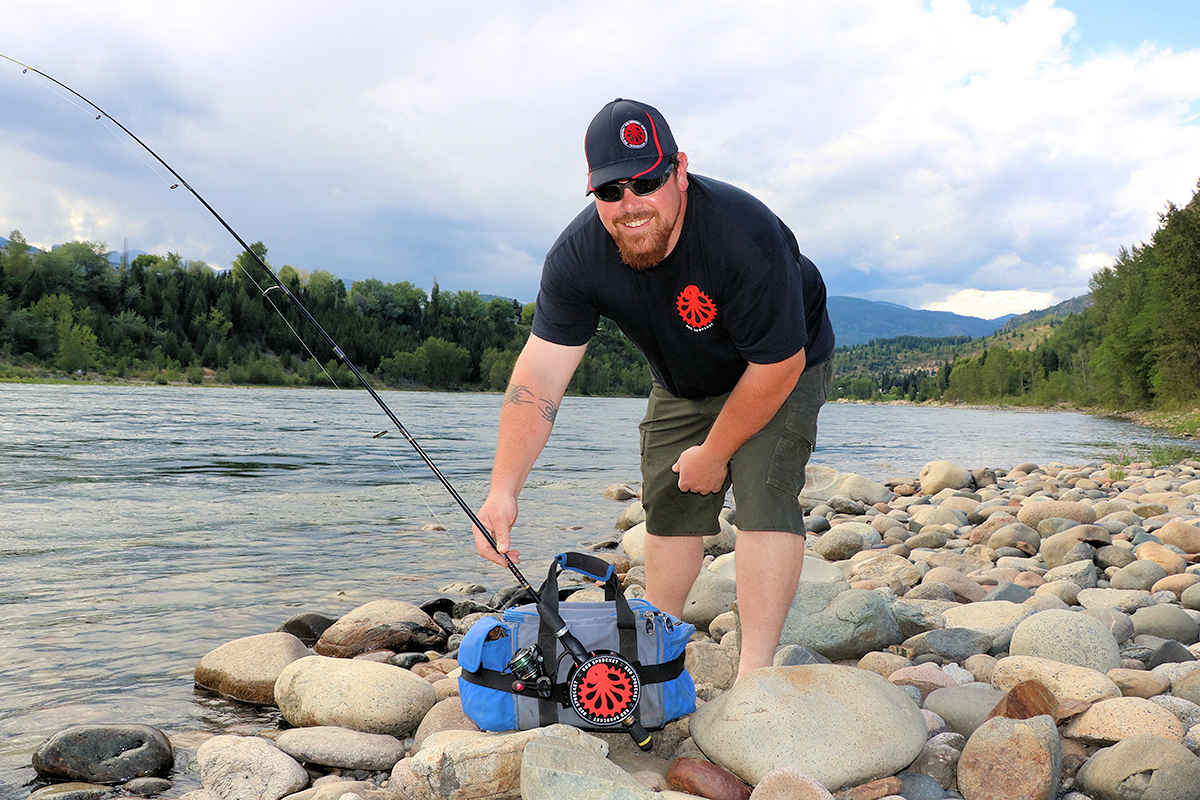 Rod Sprocket and their new and improved rod holder is one of 100 top businesses selected across Canada that is now in the running for the TELUS Pitch competition. TELUS Pitch is Canada’s largest small-business competition, offering Canadian entrepreneurs the chance to reap the rewards of their hard work with a $100,000 cash payout.

“Rod Sprocket was essentially invented out of necessity, although it was an accident,” said Martin. “Nobody intended to invent anything.” The duo didn’t try to recreate the wheel, but it is a key mechanism in their “all-terrain fishing rod holder.” The Rod Sprocket utilizes a six-foot strap and a no-moving-parts design that can be mounted horizontally or vertically to almost any anchor point. Attach it to your tackle box, camping chairs, kayaks and inflatable belly boats, boulders, logs, and even your waist. The product is also adaptable to wheel chairs and has made fishing easier for amputees and people with disabilities.

The genesis of the idea came after an excursion to Rock Island in Trail to fish for rainbow trout and walleye. “I couldn’t stab my rod holder into the ground because of the large flat boulder I was fishing off of,” said Martin.” Both Martin and Rod Sprocket C.E.O. Dintheer decided to build their own prototype after unsuccessfully scouring fishing stores and online outlets in search of a product on the market that could solve this dilemma.

The pair patented their product and took it to Kootenay Association for Science and Technology (KAST), where they were mentored by KAST’s lead business coach Don Freschi, co-founder of FENIX and host/creator of the TV program Sport Fishing on the Fly. Rod Sprocket then took advantage of the MIDAS Fab Lab facility in Trail to develop and fine-tune their design and create CAD drawings to prepare it for market.

Since then, Rod Sprocket has found its way onto the shelves of 23 Canadian Tire stores across Canada and a handful of Home Hardwares, but the partners realized that they needed to take their business to the next level. “We decided that hand-making Rod Sprockets was obviously not going to cut the mustard anymore, so we found a facility and changed our manufacturing to plastic-injection molding, allowing us mass production.

“We were lucky to have a resource like Community Futures-Trail help us raise capital as this was a costly upgrade to our production, but we knew that it was of utmost importance to have manufacturing on a larger scale in place before we went into retail environments.”

Martin, a City of Trail employee, says Rod Sprocket also auditioned for ‘Dragon’s Den’ in April, before sending their video to TELUS Pitch and successfully making it to the top 100 finalists. “Winning would allow us the financing required to launch ourselves into the US market, easily 10 times the consumer market we have here in Canada,” said Martin. “Making Rod Sprocket an international presence alongside names like Berkley and Scotty’s would be an honour.”

Rod Sprocket has also teamed up with WeSportFish.com, a website that promotes fishing on the Columbia River and local communities. They are giving away three of their products this month for a promotion on the We Sport Fish FaceBook page.

“We appreciate all the local support, this process has been absolutely thrilling, we have met so many great people that all share one thing in common, the love of fishing. “There’s just one thing left to ask, if you don’t own a Rod Sprocket, what’s holding your rod up?”

Support Brad and Garry by going to the TELUS Pitch website and casting a vote for Rod Sprocket.

Read the full story at TrailTimes.ca.