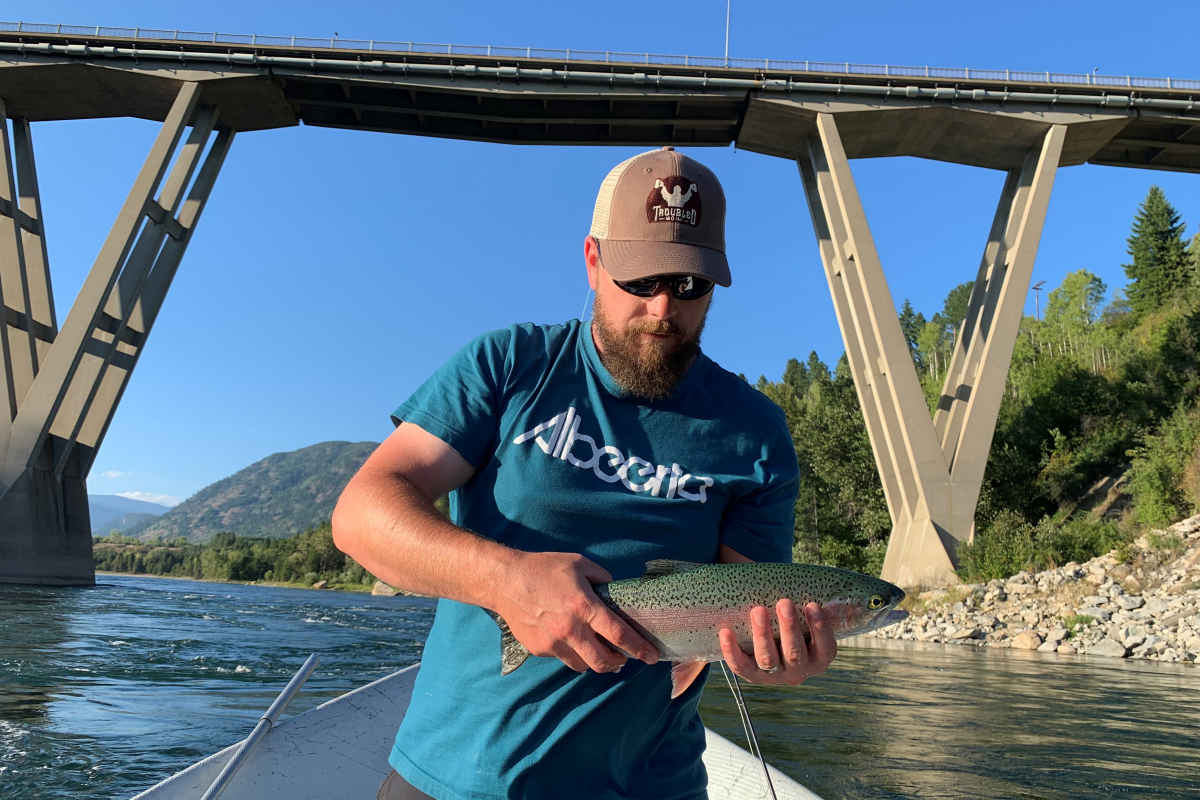 This report covers three days of fishing. When we went out on the 20th it was hot and sunny with occasional windy periods. We set out at 1:00pm from Robson and immediately started nymphing as we drifted down the Columbia. There were no takers for the nymph, so we decided to switch it up to a dry fly. I put on a big size-6 orange foam elk hair stimulator pattern and tossed it into the seams where we saw small rises in the foam. The trout quickly took the pattern and it was fish-on.

We caught and released six trout from 16-20 inches and lost another six or so. I don’t think my client was accustom to hard fighting trout. These Columbia River rainbows pull hard and unbutton pretty easily using barbless hooks. Some of the action was aerial, and some went straight down with big head-shakes. It can be quite the adrenaline rush when you are not expecting it. We drifted down to Waterloo Eddy where we hooked into a few more. All the action on this trip was in the foam, and it was a great day of fishing.

We did the same run on the 21st and again fished from 1:00 – 8:30pm. We hooked into a couple trout right off the bat using the same gear and fishing the foamy seams like the previous day. It got a little windy, and the storm clouds started rolled in around 3:30. The fishing got tough when the weather changed, and it didn’t improve until near dark when we ran into a really small caddis hatch and reeled in a couple more.

On the 22nd we went out targeting walleye for a half-day starting at 1:00pm and coming in at 5:00. We bottom bounced with a 3 ounce weight and a worm harness and night crawler. We pulled in two nice walleye and lost four; mainly due to a broken reel, but that’s another story…

As usual, we saw about three sturgeon each day we went out. We see them cruising the shoals and sometimes they breach. We also saw the normal Columbia River mix of critters such as eagles, osprey, and a few days ago a family of 6-7 otters. On the 22nd we saw a couple of eagles. One of them was really annoyed and was chasing the other. I’m not sure what the issues was, maybe they were scrapping over territory, but whatever it was they put on a great show for us.

The water is very clear and maybe a little high for this time of year. There is very little debris in the water, but there may be the odd log floating down from the mill, so it is something to watch out for. The caddis hatch is over, but you may still find the occasional tiny hatch as we did. I’m really looking forward to fishing in September when the fish are bigger, hungrier and not as picky as they are now. As the hatches slow they will bite just about anything. The bigger walleye will come out, and all types of fishing will be great. I also like to Spin cast from shore and chuck lures and use hopper patterns in the fall. As the water drops it also opens up all kinds of new structures as the smaller rocks pop up. September is one of my favorite months to fish.