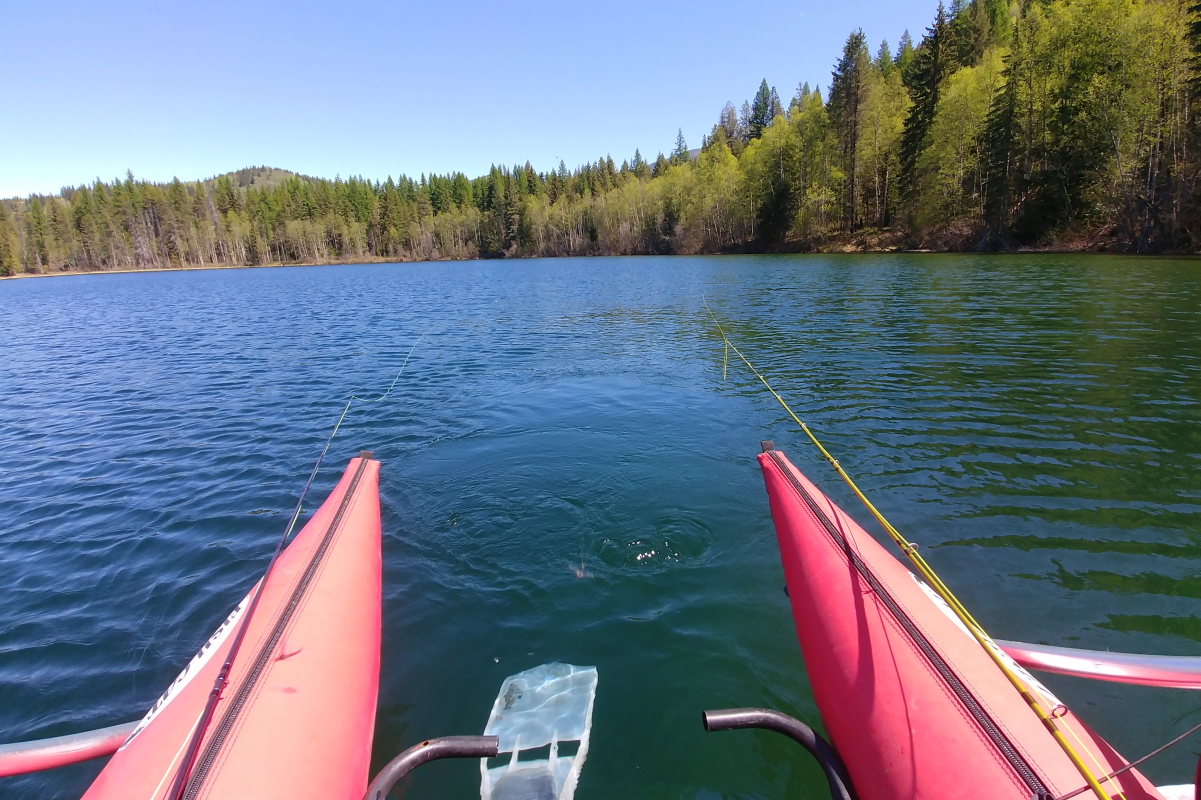 Fishing on the Columbia River has been exceptional, but sometimes you just have to try out different water especially during the spring when it’s prime time for area lake fishing.

There are a number of smaller lakes within a quick drive of Trail and Castlegar including Nancy Greene, Champion Lakes, and Rosebud Lake. I spent a few days from May 9 to 11 at Rosebud Lake during the hot spell when the temps nearly hit 30 Celsius. While Rosebud is notorious for its feast or famine type fishing, an observant angler can always figure out how to turn lemons into lemonade. When ice first comes off the lake in late April the chironomid fishing is spectacular. It is usually very good into May, but the recent blast of unseasonably hot weather changes everything.

I set out in my pontoon boat at about 9:30 a.m. and tried chironomid patterns for the first couple hours. The action wasn’t furious, but I did manage to land a couple decent rainbow trout. I opened one and expected to see a stomach full of midge pupa, but instead it was full of dragonfly and mayfly nymphs. I grabbed my #4 sink line and tied on a dragon fly nymph, and within 30 minutes I had landed three more trout.

About noon mayflies started to come off the water. I changed to a mayfly nymph, and cast, within a couple pulls a rainbow hammered the nymph. I fought and landed a nice 16-inch trout, and about two casts later another one smashed it. The fishing continued like that for about another hour, then slowed.

I took a break, then returned to the water about 4 p.m. – Queue the flying black ants. They were everywhere, and I happened to have a single pattern tucked in the corner of my fly box, so tied it on about 12 feet of 3x leader and floating line. The rainbows were rising sporadically but after a couple casts, I was into a nice one. As the evening wore on, the action picked up and it turned out to be a beautifully serene but successful evening of dry-fly fishing.

Rosebud is a pretty little lake, and the fishing good, sometimes great. You can make it better by being observant and change tactics depending on the conditions and hatches. Whatever you do, there are so many cool things to take in at Rosebud from the rich variety of birds, multitude of painted turtles, and the young eagles soaring overhead and occasionally diving for trout.

Rosebud, Champion, and Nancy Greene also have a ‘no motor’ restrictions, which also includes no electric motors; but the lakes are great for paddlers, float tubes, pontoon and jon boats. Enjoy.